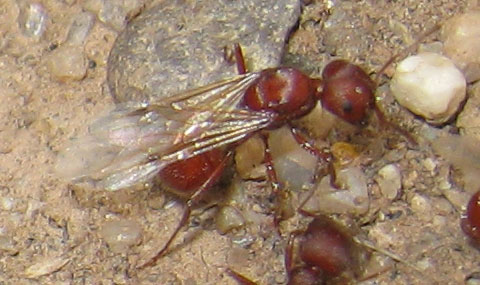 Right now is a good time to observe winged ants. In summer, mostly from late June through early August, ant colonies produce winged ants, called alates. Both male and female alates are produced, and their purpose is to make new colonies. They emerge from the ant colony, fly around, and mate in mid-air. When the mated female returns to the ground, she sheds her wings and walks around looking for a place to make a nest.

Our local harvester ants (Pogonomyrmex barbatus) are just now producing winged ants. These photos were taken on Barranca Mesa on June 24th. For harvester ants, it’s very easy to tell the male and female alates apart – the males are black, females red. For most other species of ants, the sexes can only be distinguished by differences in body size or shape.

The best way to start an ant colony in captivity is to find a female that has shed her wings (a de-alate ant). It might seem like an impossible task to find such an ant, but it’s easier than it sounds. New queens may spend a long time looking for a place to make a nest, so they sometimes walk around in strange places, like sidewalks and patios. During prime ant season, they are everywhere, so some of them end up in places where they are easy to see.

New queen ants can be distinguished by the following characteristics:

Not every queen will have all of these characteristics. Once you catch an ant and look at it up close, there is one definitive test of whether it is a nascent queen: wing scars. These can be seen clearly with a good hand lens. You can see the wing scars in some of the photos below.

Once you know what to look for, it’s fun to try to find alates and new queen ants. Happy hunting!