Home › Nature News › Bird of the Week – The Broad-tailed Hummingbird 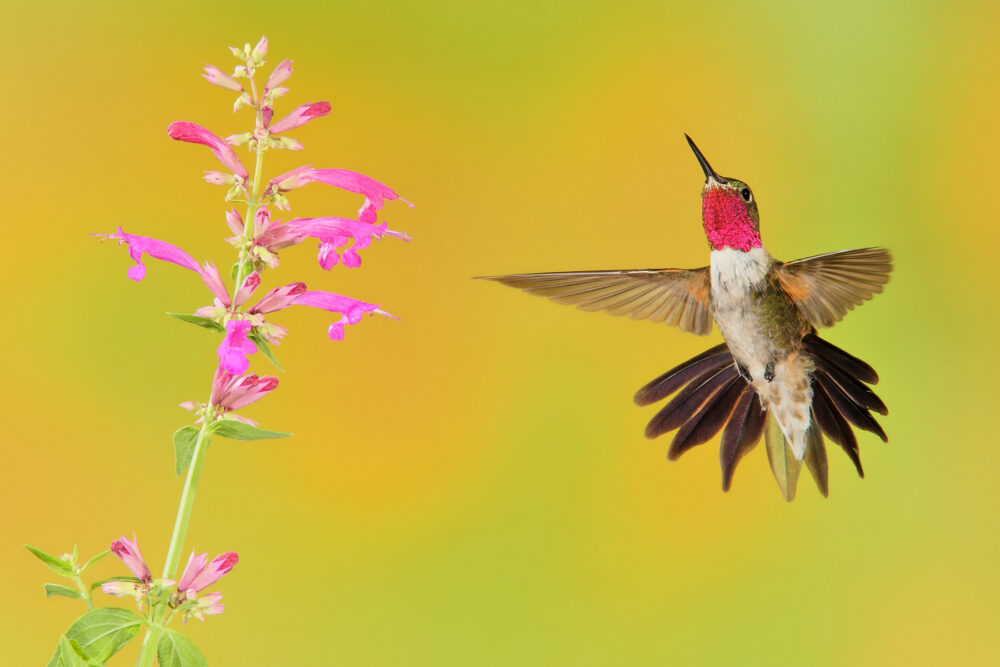 By Bob Walker and Sandra West

While in Los Alamos, these small jewels breed and raise their young before returning to southern Mexico and Guatemala in mid-October. The male hummingbirds arrive first, to scout out territories, and the females follow soon after. They build small cup-shaped nests from bits of leaves, lichens, and mosses that are woven together with spider webs and anchored to tree limbs. The nest location is often hidden from above by other limbs, to afford some protection from predation or weather. If you find a nest, leave it in place as they will often reuse it.

In addition to visiting human-maintained feeders, Broad-tailed Hummingbirds consume a typical hummingbird diet of nectar from flowers and small arthropods. They have also been known to use sap from trees and shrubs as a nectar substitute.

The males and female adults are easily distinguished from one another. The male, shown above, has a bright iridescent pink gorget, with green flanks and usually some rufous tail feathers. You can’t see his modified primary wing feather, but you can hear it – that’s what causes the flying bird to make a distinctive high-pitched trilling whistle (listen to a recording below). The female (below) has a stippled throat, and buffy feathers below its green wings. Females do not make any sound when they fly, but you can hear a female chattering below. Juveniles and immature males resemble the females.

Quite a large amount of research is dedicated to hummingbirds in general, and to Broad-tailed Hummingbirds specifically. We have a volunteer team of hummingbird researchers in Los Alamos, headed by Lisa Roig, who also volunteers at the nature center. Be sure to ask her about her work with the Hummingbird Monitoring Network when you see her there.

Find more detailed articles about the Broad-tailed Hummingbird on these web pages: identify.whatbird.com and allaboutbirds.org.

Hummingbirds are very popular photo subjects, and you can find many, many images on the internet. Beautiful photos of Broad-tailed Hummingbirds can be seen at the Brian Small gallery, and there are some images from Los Alamos area in my own gallery.