Home › Nature News › Bird of the Week – The Calliope Hummingbird 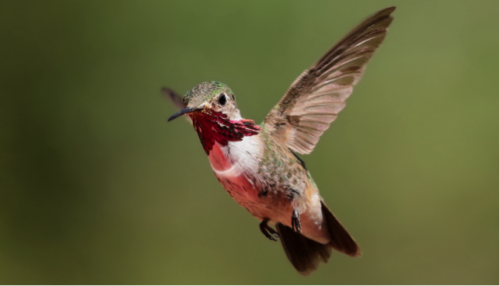 Our fourth and final hummingbird installment features the beautiful but very tiny Calliope Hummingbird (Selasphorus calliope). They are the smallest bird that breeds in North America and are the smallest long-distance migrating bird in the world. The exquisite males have coral-colored iridescent gorget feathers that form streaks radiating from their otherwise white throat. The females and immature males are less showy, resembling a small Broad-tailed Hummingbird female, but with a shorter bill, shorter tail, and a different shade of color on their flanks. While most bird books would say the Broad-tailed Hummingbird females have rufous on their flanks, for the Calliope female, they describe their flanks as “peachy” in color. Although these hummingbirds are the least common of our four hummingbird species, the males are easily recognized when you are lucky enough to find one.

Their extremely small size makes them important birds for research, since they live at the extremes of existence. They prefer cool, high altitudes, so it is very important that they ingest enough calories to keep warm, and to make their migration journey of up to 9,000 km each year. The details of how they manage their energy budget is still unknown. It is very possible that the Jemez mountains are a very important stopover point on the southward migration of these hummingbirds, as very little is known about the specifics of their migration.