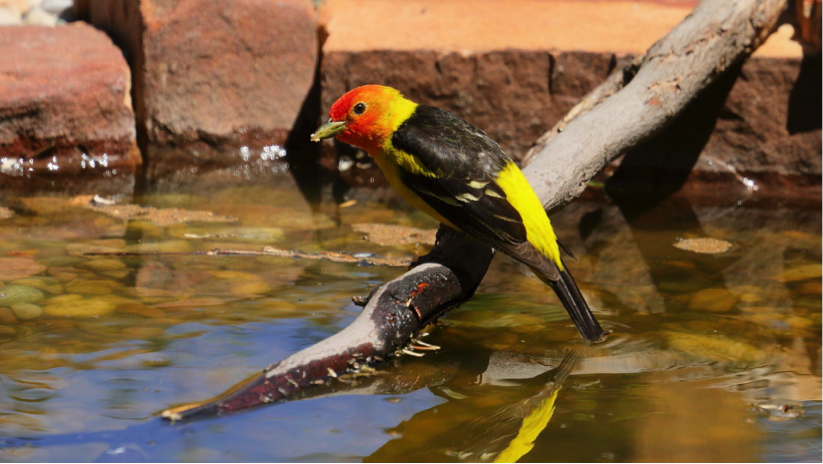 Possibly the most colorful bird regularly seen in Los Alamos during spring migration is the Western Tanager (Piranga ludoviciana). They are the featured bird this June for the National Parks Service’s “Year of the Bird.”

These brightly colored birds spend their winters in southern Mexico and migrate north to spend their summers almost anywhere west of the front range of the Rockies. Although they will stay in the Los Alamos area all summer long, as the weather gets hotter, they retreat to the cooler canyons or higher elevations to breed. Most years they show up in small numbers in late April and early May, even conspicuously visiting backyards in both White Rock and Los Alamos for a week or more. Migration in 2015 was an exceptional banner year, with Western Tanagers showing up in extremely large numbers and staying around for about a month, until early June. The spring of 2018 was not particularly productive, but you may still see some stragglers into June, and if you take hikes into our canyons, you should look for them.

Western Tanagers have a recognizable call (“pit-er-ick”) and a more melodious song that (to me) sounds a bit like an American Robin, as in the recording below from Colorado:

Only the adult male Western Tanagers show the bright yellow body and red facial plumage, with dark black wings. The adult females are drabber in color, primarily light yellow overall except for brown or olive-green wings, as below. 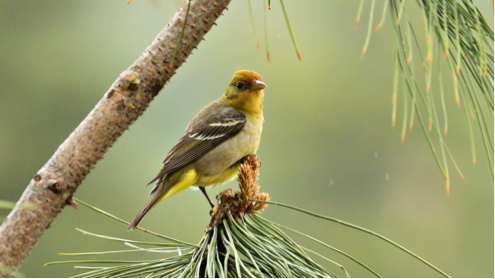 If you want to attract migrating Western Tanagers, provide them with water and fruit (oranges cut in half, or grapes). They mostly eat insects, either picking them off leaves or pretending to be flycatchers and snatching them from the air.

Find more articles about the Western Tanager on PEEC’s nature guide and on these web pages: identify.whatbird.com and allaboutbirds.org

Enjoy more beautiful photos of Western Tanagers at the Brian Small’s web site, or by searching Google or Flickr.