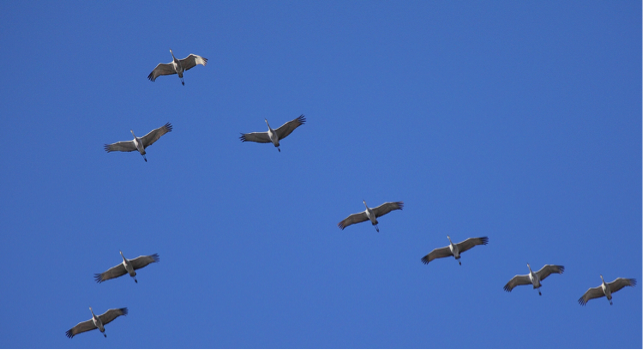 New Mexico’s Sandhill Cranes (Antigone canadensis) are returning north now, after spending the fall and winter at their feeding grounds along the Rio Grande River from Albuquerque down to the Bosque del Apache. In February and November, it is a familiar sight to see v-shaped formations of Sandhill Crane flocks flying overhead and circling over the Rio Grande River, an important flyway for the large birds. Like vultures, they ride thermals to gain altitude for their migrating journey to and from their summer breeding grounds in the Northern USA, Canada, and Alaska.

Cranes feed largely on seeds in winter, especially from unharvested grains, but they will opportunistically feed on emergent vegetation and smaller insects, and occasionally on small animals such as birds, snakes, and rodents. In the summer, the bulk of their diet consists of plants, insects, and earthworms. While some protein is necessary to supply them with essential amino acids, too much protein (in our subspecies) can apparently result in growth deformities.

Go outside and listen, and you may hear the familiar rolling trumpeting of Sandhill Cranes as they return north.

Sandhill Cranes have been heavily studied, so there are numerous web resources available. Look for articles about Sandhill Cranes on the web pages at identify.whatbird.com or allaboutbirds.org or the PEEC Nature Guide. Enjoy more beautiful photos of Sandhill Cranes at the Jacob Spendelow and Brian Small web sites, or by searching images on Google or Flickr.