Home › Nature News › Bird of the Week – The White-crowned Sparrow 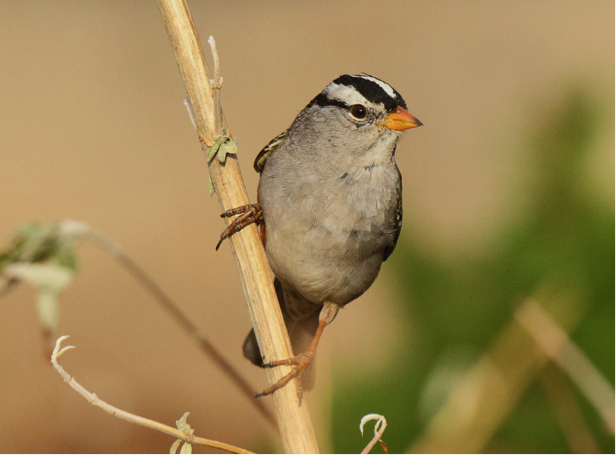 The White-crowned Sparrow (Zonotrichia leucophrys) is one of the few bird species we see more frequently in the winter months than in the summer months. These medium-sized sparrows spend their summers in the northern Rockies, all the way up to Alaska and northern Canada, and winter in the southern US. They can be seen in the Los Alamos area from October through March, and we have been seeing reports of them for a couple of weeks now. So this makes them fairly common, especially in the canyons and mountains, but they were evading observers at the nature center until recently. Look for the bright yellow bill, unstreaked breast, and the distinctive alternating black-and-white stripes on his head; the White-crowned Sparrow is about the size and shape of a House Sparrow.

The White-crowned Sparrow’s song has fascinated scientists, making this bird the subject of the most thorough studies of any bird. These studies have taught us not only about how young birds learn to sing, but also about geographic variations of a bird’s song. The song is reasonably distinctive – listen to it here and then see if you can hear it in open spaces in the county.