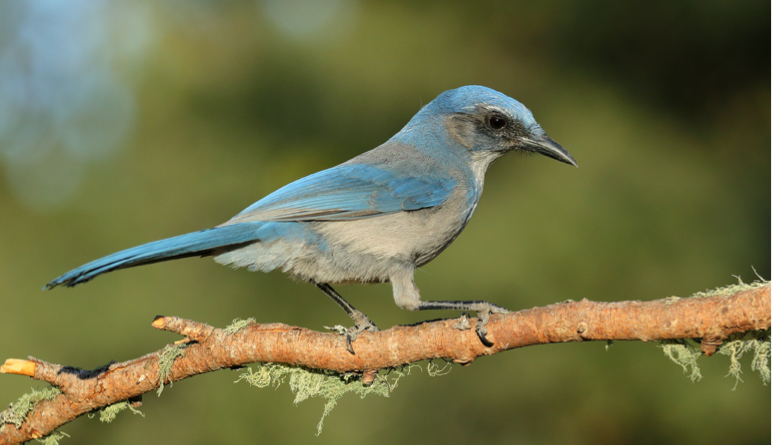 The most common jay of the piñon-juniper zone, the Woodhouse’s Scrub-Jay (Aphelocoma woodhouseii) is more likely to be seen in White Rock than at the higher elevations of Los Alamos, including the nature center. They are quite common in White Rock right now, noisily enjoying peanuts that have been put out as food for irrupting montane birds such as last week’s Steller’s Jays. These grayish-blue birds have gray bellies, blue and gray backs, and a streaked white throat. On most individuals, you can see a thin white eyebrow above the eye.

Scrub-Jay species are common in most of the southwest, from California to Texas, and are year-round residents of Los Alamos County. Until recently, these birds were considered a single species called the Western Scrub-Jay, but in 2016 they were split into two species, the California Scrub-Jay and Woodhouse’s Scrub-Jay. The Woodhouse’s Scrub-Jay is named in honor of Dr. Samuel Woodhouse, a 19th century naturalist.

Like other corvids, Woodhouse’s Scrub-Jays are highly intelligent. In behavior once thought to be exclusively human, the Jay plans for the future, stashing food in preparation for winter, and it demonstrates an excellent spatial memory in being able to retrieve food caches many months later.

The calls of the Scrub-Jay are very recognizable. Listen to a Woodhouse’s Scrub-Jay near Albuquerque: