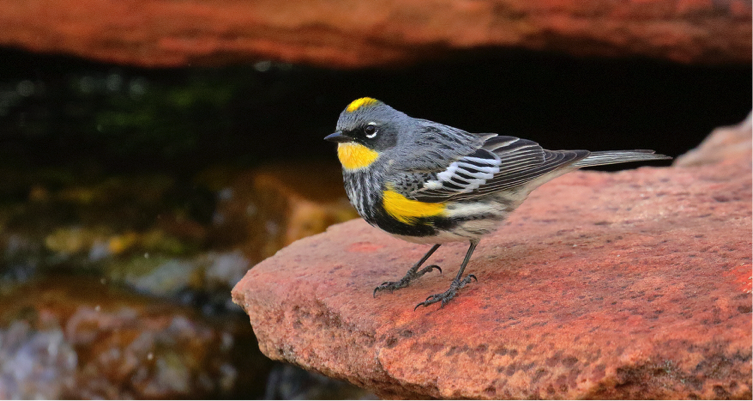 The Bandelier Bird of the Month for May is the Yellow-rumped Warbler (Setophaga coronata), who has recently arrived for our enjoyment of the 2018 spring migration season. The brightly colored males are wearing their breeding plumage, and after breeding has completed, they move deeper into the forests to raise young here, and their plumage reverts to a more drab version of themselves.

Females are generally more drab even in the spring, but all Yellow-rumped Warblers can be identified by the yellow patch on their rump, and the patch of yellow below the front part of their wing. One of the most common warblers in North America, it feeds largely on berries and insects. In the spring, it primarily catches insects and looks for grubs in trees, and in the fall, it will eat berries of juniper, Virginia creeper, dogwood, poison oak, and poison ivy. In your backyard, you may see them coming to a water feature looking for a drink.

There’s more than one kind of Yellow-rumped Warbler – in the west, we primarily see the Audubon’s Warbler (Setophaga coronata auduboni, pictured at the top), and in the east, the predominant subspecies is the Myrtle Warbler (Setophaga coronata coronata), pictured below at the left. Note the main difference is the color of the throat feathers (white for the Myrtle Warbler, yellow for Audubon’s). Because both these subspecies of Yellow-rumped Warblers hybridize, especially here in the southern Rockies, they are currently treated as a single species, but they were once considered two species, and someday may be reclassified as two species again, after consideration of DNA evidence. 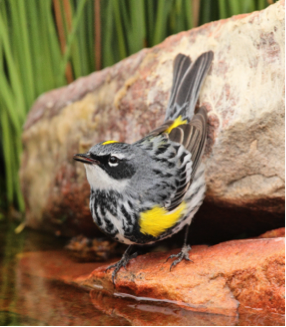 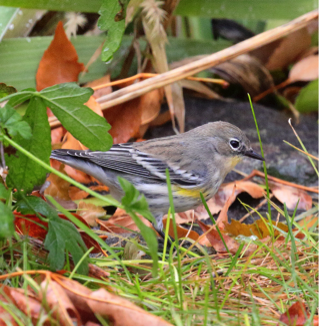 You can also find more detailed articles about the Yellow-rumped Warbler on the web pages at the PEEC Nature Guide or at identify.whatbird.com and allaboutbirds.org. Enjoy more beautiful photos of Yellow-rumped Warblers at the Brian Small web site, or by searching Google images or Flickr photo pages.