Home › Nature News › The Science of Slowing Down Outside 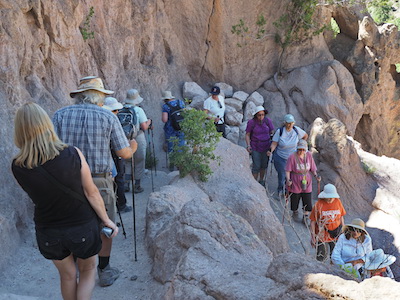 The Gentle Walkers were perched on rocks and logs in a grove of trees. The shade and a soft breeze cooled us. Nearby, the East Fork of the Jemez River gurgled on its way to the canyon. Butterflies danced over wildflowers in a sunny nearby meadow. Birds sang or called from the trees, coming ever closer the longer we sat in silence.  The peace settling over us was palpable.

Experience has shown that quiet moments like these, unattached to the World Wide Web, can settle us and ease the stress in our lives. Science has been catching up with this idea, which was given focus by the Japanese practice of shinrin-yoku, which is defined as “the practice of walking slowly through the woods, in no hurry, for a morning, an afternoon, or a day.” It is quite similar to the definition of sauntering: walking in a slow, relaxed manner, without hurry or effort.

In attempting to cope with the stress of modern life, some people in Japan started the practice of shinrin-yoku. Since it began to be noticed in the late 1990s, more and more people have practiced it because instinct and experience told them they felt calmer and more collected after a walk in the woods. While it began as an “intuition based therapy, it has now become an evidence-based therapy and can now be considered to be preventative medicine.”

Over the past 20 years, research in Japan, South Korea, Scandinavian countries, and the United States have documented the health benefits: a lowering of action in the sympathetic system, which is the source of our flight or fight response to stress, and more action in the parasympathetic system, which relaxes the body by putting it in a healthier rest and digest mode and restoring us to a state of peacefulness. In addition, a person’s blood pressure, pulse rate, blood glucose level, adrenaline, and cortisol can drop after time in the woods. The number of killer cells in the blood rises, strengthening our immunity. We sleep better. All this can stem from a stroll in the woods. People being people, they have capitalized on these finding, forming elaborate rituals and forming national and international organizations to standardize the practice. Still, it all comes down to a simple walk in nature without cell phones with the possible addition of a few simple exercises to increase one’s skill in observation.

On Friday, July 12, PEEC will have a special edition of our weekly Gentle Walks to celebrate Los Alamos ScienceFest. This outing will be centered on the idea of shinrin-yoku, which is meant to reduce stress by enhancing one’s observational skills and bringing you closer to the peace of the forest. We will have several short exercises focused on seeing, hearing, smelling, feeling, and contemplating the place that surrounds us. We will meander along, taking in the world around us, celebrating its peace and beauty. We will not be trying to reach the end of the trail, which, we have found, changes the atmosphere and the peace of the experience.

In short, we will heed John Muir’s advice: “People ought to saunter in the mountains — not hike!”

Meet at the Los Alamos Nature Center at 8:30 AM for Friday’s outing. You can pre-register for this walk here and request to join the Gentle Walkers email group for updates on upcoming walks by emailing publicity@peecnature.org.