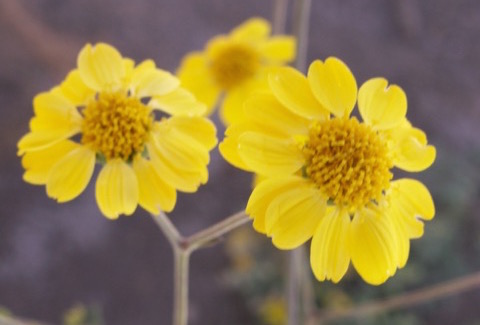 This week’s flower is called Bahia. Its botanical name used to be Bahia dissecta, but its genus was changed to Amauriopsis.

There are two other common and widespread yellow daisies in bloom right now. Two weeks ago, I highlighted a yellow flower that is blooming like crazy around town, Goldeneye (Heliomeris). The other yellow flower is the disturbed ground Cowpen Daisy with its arrow-shaped, toothed leaves.
Bahia (Amauriopsis dissecta) is a similar to Goldeneye (Heliomeris), but a closer look will reveal the differences. First, let’s look at the petals; Heliomeris has rounded to pointed tips while Bahia’s petals are more squared off with a ‘dimple’ at their tips. Second, Heliomeris has pairs of narrow, pointed leaves while Bahia’s leaves are deeply lobed and finger-like. Finally, Heloimeris is somewhat bushy with lots of stem leaves while Bahia looks more like flowers attached to a bare wiry set of stems.
Both are common right now and can be found blooming in the same areas. These two flowers grace our landscape with sometimes spectacular large-scale blooms.
Enjoy.