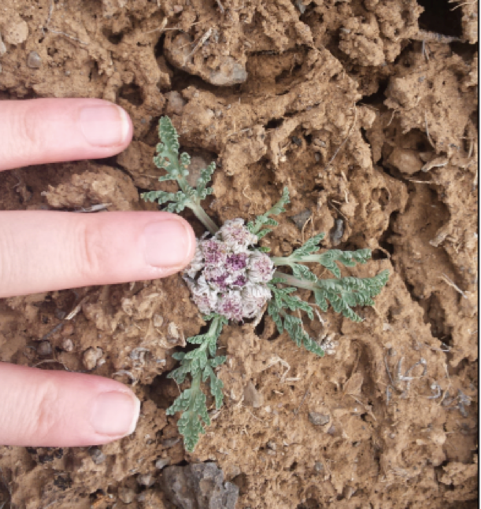 Here is one of our earliest bloomers. It is in piñon-juniper woodland areas along White Rock Canyon Rim Trail or around Overlook Park as well as other similar places.

It is called wafer parsnip, which used to be Cymo-pterus bulbosa, but the “wise” folk decided it is different enough to have its own name—Cymopterus constancei. So flower books may have either of these names.

Note that I hyphenated its generic name to highlight the greek word for root, ptera, which means winged as in pteradactyl. Most people pronounce the word—Cymop-teris, but that is just phonetic and doesn’t tell you anything, while Cymo-pteris tells you it is going to have wings somewhere. In this plant the wings are on the seed pods and are quite dramatic. It has a cousin, Cymo-pteris fendleri, that is call ‘chimaja’ in Spanish and whose leaves make a tangy addition to a fresh spring salad. That plant will not appear for about a month. So enjoy this harbinger of spring for now.