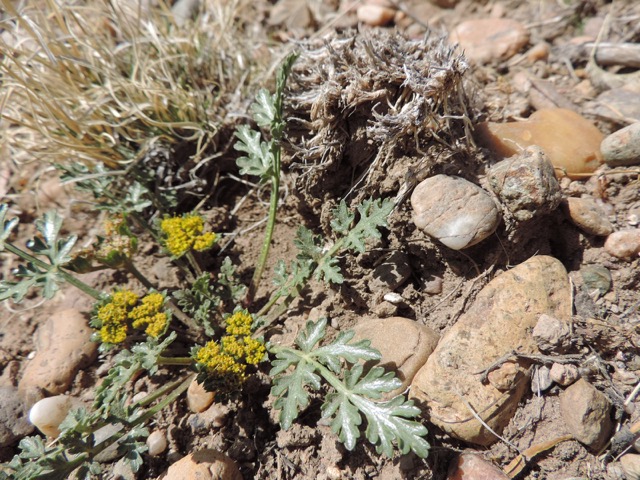 Spring is upon us with nearly 30 plants blooming! One however, is more fun than the others. Some may know it as ‘chimaja’ and and use the leaves to spice up green salads in spring. Botanists gave it the imposing name Cymopteris acaulis, variety fendleri.

It grows all over at lower elevations from Ghost Ranch to Santa Fe. Ours seem to be restricted to the White Rock Rim trail in the open flats For example, the photo above was taken on the White Rock Rim trail, one quarter mile south of the Blue Dot trailhead. As the picture shows, it is a low-growing spread of shiny lobed leaves that taste like spicy celery. which surround the central groups of tiny yellow flowers.

It’s in the Queen Anne family that includes parsley, the toxic hemlock (that killed Socrates), and others. Chimaja is like another early bloomer—wafer parsnip—called parsnip because of its big, bulbous root. But the wafer parsnip has pink flowers and its leaves are not shiny.