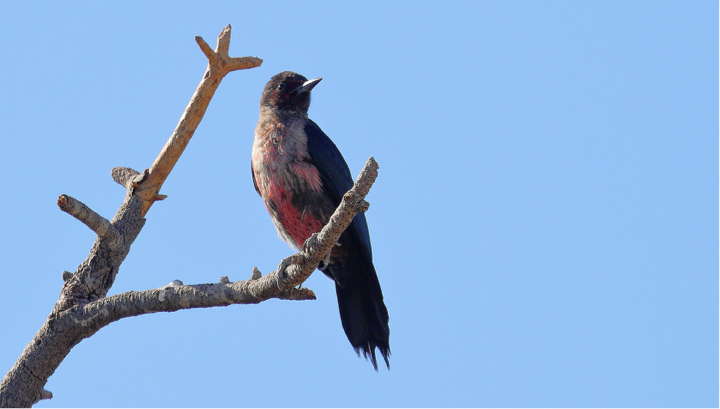 Lewis’s Woodpecker (Melanerpes lewis) is a relatively uncommon woodpecker in Los Alamos County, but over the last year we have seen them in several different locations, though there have not yet been any reports from the Los Alamos Nature Center. These dark woodpeckers, with a rosy-colored breast, red face, and very dark green backs like the open woodland habitat in our area. Reports of them have been made from several locations within the Los Alamos townsite, from Bandelier, and from White Rock, so you might be on the lookout for them. They fly much like a crow, with slow deliberate wingbeats.

Named for Meriwether Lewis, who described them on the Lewis and Clark expedition, these woodpeckers are residents of the western USA, and can be found all year long in Los Alamos (and indeed extending to the four corners area of New Mexico, Arizona, Utah, and Colorado). Rather than dig or drill into wood for insects, in warmer months they are content to glean them off trees or to catch them like a flycatcher. In cooler weather they will compete with Acorn Woodpeckers (near cousins) for nuts and acorns.

These are relatively poorly-studied birds – they depend on recently burned forests to nest at the tops of dead snags; our recent fires may explain why we have been seeing more in recent years. They are known to prefer Ponderosa forests, Cottonwood forests, and to a lesser extent Aspen forests. In part because of their small populations, they have not been studied well enough to understand their sensitivity to interaction with humans, forest management, and habitat loss, and so they are listed as “Least Concern” on the IUCN (International Union for Conservation of Nature) Red List, with a note that it appears they are thought to be decreasing in population (based in part on data acquired by Breeding Bird Surveys, such as is currently being undertaken in Los Alamos County).

You can also find more detailed articles about Lewis’s Woodpecker on the web pages at identify.whatbird.com and allaboutbirds.org. Enjoy more beautiful photos of Lewis’s Woodpeckers at the Hari Viswanathan and Brian Small web sites.