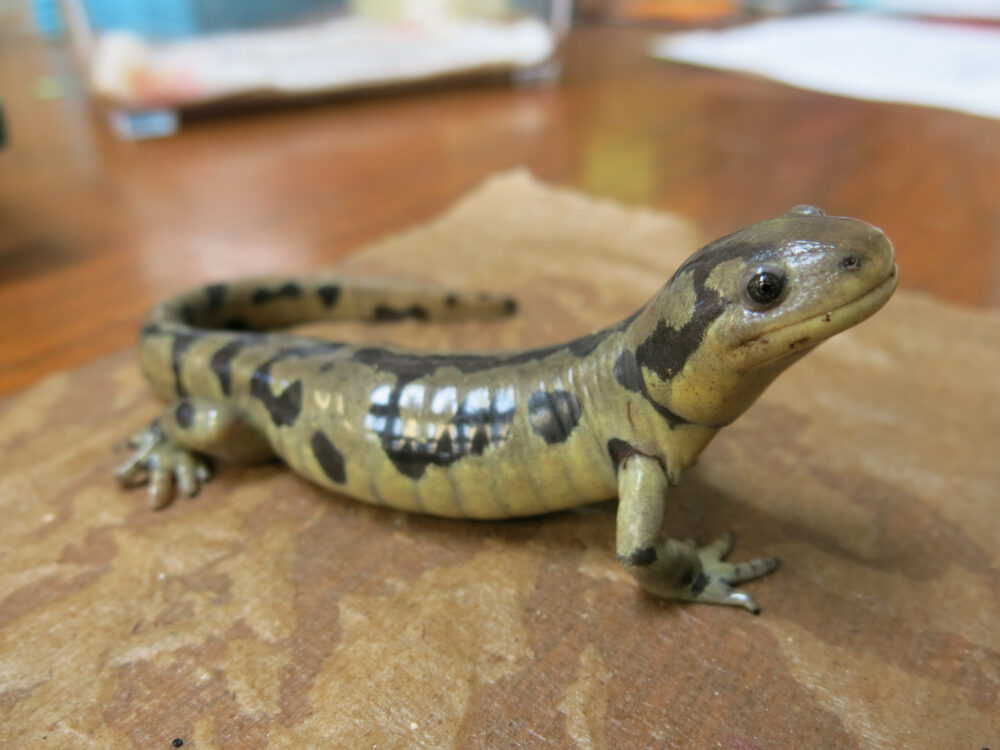 Expanded version of the article printed in Nature Notes No. 4, 2017

Tiger salamanders are common on the Pajarito Plateau and throughout northern New Mexico. Because they live underground, we rarely see them. The underground parts of our world are one of our “final frontiers”; we know very little about what goes on down there!

More interesting are cases in which tiger salamanders have been shown to actually interact with resident mammals. The paper that first brought this phenomenon to our attention was Semonsen, 1998, in which multiple California tiger salamanders were found hibernating with a ground squirrel. They were not only in the same burrow chamber, but some salamanders were found underneath the ground squirrel when a fiber-optic light was used to examine the burrow and the squirrel awoke.

The infrared image video clip below shows a tiger salamander in a burrow with a deer mouse in South Dakota. The salamander does not seem to mind being stepped on!

Tiger salamanders also dig their own burrows in nature, at least for short-term use. The excavation prowess of tiger salamanders has been studied in the lab and can be confirmed by any keeper who has watched these pocket rototillers destroy terrarium landscaping. The video below shows one digging its own burrow in a mole hill (Posted by Kalvin Knaggs, Manitoba, Canada, 2014). Even when digging on their own, they are said to dig mainly in disturbed soil (as they have no claws). They most often dig in ground loosened by burrowing mammals, as in the video, so mammal burrows are very important to tiger salamander habitat.

Denning with mammals may be an  ancient practice for amphibians. In 2013, imaging was  performed on an unusual fossil from the  early Triassic, about 250 million years ago (Fernandez et al., 2013). It was found in South Africa, which was part of Gondwanaland at that time. A preserved burrow was  found to contain a fossilized Temnospondyl amphibian curled up alongside an apparently estivating  therapsid mammal forbear. This does make us wonder whether the salamander-mammalian association has ancestral roots.

Do the tiger salamanders here on the Pajarito Plateau live together in harmony with our local gophers, ground squirrels, and mice? Based on other examples, it seems very likely. Our dry terrain forces many animals to seek moist habitats underground, and rodent tunnels afford shelter to a wide variety of other species, including our common-but-rarely-seen tiger salamanders. We can only speculate on how the salamanders might interact with other burrow residents.