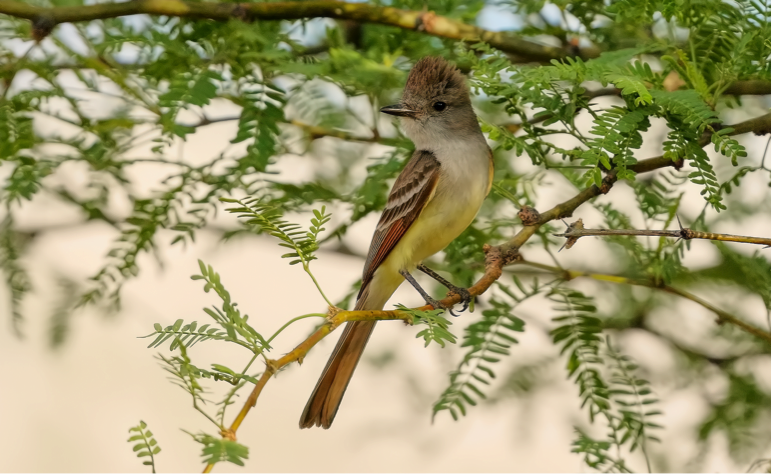 When spring and summer arrive in Los Alamos County, we see a yearly influx of several species of tyrant flycatchers (of the family Tyrannidae). One of the most common are the Ash-throated Flycatchers (Myiarchus cinerascens), which are the August selection for Bandelier National Monument’s Year of the Bird program. The National Park Service designed this program for 2018 to highlight the importance of protecting migrating birds in honor of the 100th anniversary of the Migratory Bird Treaty Act. You can visit Bandelier’s website to learn more about this program for the remainder of the year.

The Ash-throated Flycatcher is a medium-sized bird, smaller than an American Robin, but larger than a sparrow or House Finch. It has a darker brown crest, gray throat and upper chest, yellowish lower belly, and a brown to gray back with rufous-lined primary feathers.

It winters along the Gulf and Pacific coasts of Mexico, and then migrates north for the summer, where it is seen in all the southwestern states. They are in Los Alamos County from early May to mid-August, and then they return to Mexico for the winter. They have been reported at the nature center only a few times, but are readily found in early summer if you take an easy hike from the nature center on the trails that lead down to Pueblo Canyon. They display characteristic behavior of flycatchers, sitting on exposed perches usually early in the morning, flying off to snatch an insect out of the air or off the ground, and then often returning to the same perch they originally left.