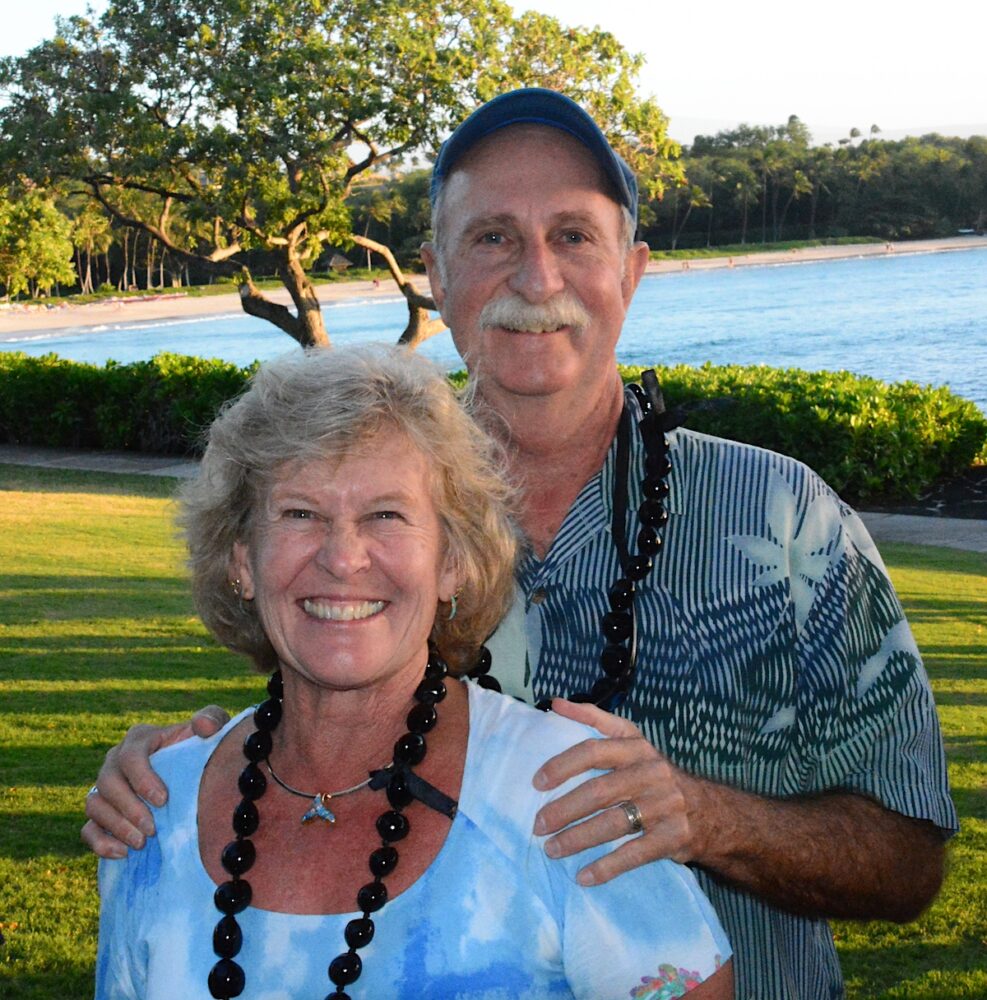 Fraser and Cathy Goff are PEEC volunteers that lead geologic tours through the Valles Caldera. The Valles is one of three active calderas in the mainland United States and the hot magma is only three miles below your feet when standing in the Valle Grande. Fraser Goff, retired geologist for LANL and adjunct professor at UNM, has been working on the Preserve for many years and has authored numerous books and papers dealing with the geology of the caldera. With the help of his geologist wife, Cathy Goff (retired from US Geological Survey), he conducts fact-filled tours of the east and central parts of the Preserve and provides thought-provoking answers to the public’s curiosity about this wonderful landscape. We hope you enjoy learning more about volunteers, Fraser and Cathy Goff.

PEEC: Where are you from and how did you end up in Los Alamos?

F.G.: I’m from the San Francisco Bay Area. I got my Ph.D. from UC Santa Cruz. I was hired by LASL right out of graduate school to work on the developing Hot Dry Rock program, an alternate energy program heavily funded during the Carter Administration. My job was to help find the NEXT “Fenton Hill.” I had done an extensive project in The Geysers, California for U.S. Geological Survey (USGS) on geothermal exploration and had written a paper on the results. I gave a talk at the national Geological Society of America meeting in Seattle on this work, and I was immediately approached by Los Alamos scientists about a job.

C.G.: I grew up in Coquille and Coos Bay, Oregon, but moved to California in the middle 1960s. I became a homemaker, a mother of 2 small children, and spouse of a computer software engineer. After my family lived in Switzerland for 6 months for my husband’s work, I decided to go back to school to better understand the spectacular topography of central Europe, and to become employable. Eventually, I got my BS in Geology from San Jose State University while working for the US Geological Survey in Menlo Park on gas and isotope geochemistry of geothermal systems in the USA and abroad. I also attended Stanford University for a year on a USGS scholarship. I first met Fraser in 1982 at the Cerro Prieto geothermal field in northern Baja, Mexico, where he came to learn my project’s methods for sampling fluids from high-temperature production wells in preparation for his geothermal drilling efforts in Valles Caldera. Over the following 20 years, our paths crossed several times for DOE and USAID funded geothermal exploration/development projects in the US and Central America. In late 2002, I was retiring from the USGS, and living in San Francisco. As we were both single again, Fraser proposed that since we had formed such a productive and successful professional team, as well as being great friends, perhaps we should really “get together.” He bought a one-way ticket to San Francisco, rented a Penske truck with a trailer for my car, picked me up from my apartment on a narrow city street, and then we loaded my belongings from a storage facility. We drove off to New Mexico in early winter, and had to stop for a night in Grants because I-40 closed due to a horrendous snow storm — spontaneous, crazy, but very romantic!  Obviously, his ploy worked; we were married in mid-2003, and made a wonderful life together in Los Alamos.

PEEC: How did you get involved with PEEC??

F.G.: Cathy and I have been leading geologic field trips through Valles Caldera for many years, and PEEC has sponsored our trips since 2015.

C.G.: I always accompany him and sometimes assist in the discussions. We also attended the planning meeting on science objectives and displays for the new center.

PEEC: Tell me about your education and background.

F.G.: I got my Ph.D. in Earth Science (volcano petrology) from UC Santa Cruz. While in college, I worked for eight years for the US Geological Survey in Menlo Park California. I was fortunate; I worked with some of the best government-funded geoscientists in the world. After I retired in 2004, Cathy and I worked for STATEMAP doing geologic mapping in New Mexico on volcanic areas, notably Valles Caldera, Mount Taylor, and Sierra Blanca (near Ruidoso).

C.G.: It turns out that Fraser and I led parallel lives without ever meeting until our careers crossed paths.  He left San Jose State before I arrived, and then I landed a part-time job at the USGS, which happened to be with one of the projects that he had recently left. I worked about 25 years in the USGS geothermal group: first as a tech, collecting and analyzing geothermal fluid samples annually from Yellowstone, Lassen, and Cerro Prieto. I then advanced to manager of the gas and stable-isotope lab and continued work on understanding the geochemistry of natural and exploited geothermal systems including the Salton Sea, Valles Caldera, Coso Hot Springs, and Steamboat Hills (NV), Unalaska, and Iceland. I eventually rose to Project Chief and PI of exploration and development of geothermal systems in The Geysers, Eritrea, Honduras, and Guatemala.  When our USGS team was reorganized to Volcano Hazards, I had to revamp the analytic capabilities of the lab to include fluid samples from active volcanic hydrothermal systems in the Cascade Range, Japan, and Italy — a whole different beast!  When I retired in late 2002, Fraser and I decided to be together in Los Alamos where we’ve been ever since.  But my career didn’t really stop. I first became Fraser’s unpaid field assistant (at age 56) for LANL-funded, detailed remapping of Valles Caldera.  When he retired from the lab and joined STATEMAP, I continued working with him mapping NM volcanic systems. We worked as geothermal consultants for projects in the US, Portugal, and Peru. We were also speakers for a geothermal class in Erice, Italy.  We are and continue to be a great team!

PEEC: What do you enjoy most about volunteering?

F.G.: We love interacting with the public and turning people on to rocks, geology, hot springs, faults, and the evolutionary history of fabulous volcanoes!

C.G.: I really enjoy co-leading the PEEC field trips.  We love what we do, and our enthusiasm is contagious.  I love to see the participants (kids and adults) have “aha” moments when they truly understand our explanations of the geologic structures, the rocks, or minerals.

PEEC: In your opinion, what’s the most essential work PEEC does?

F.G.: Getting the general public and children turned on to natural science and (dare we say) geoscience.

C.G.: PEEC provides fantastic family and youth programs to help our residents understand and appreciate the amazing environment we live in.  It is so rich with geologic history, biologic diversity, and big dark skies.

PEEC: What outdoor hobbies do you enjoy?

F.G.: We love to garden, to create little bird habitats, to hike, to camp, we love amateur astronomy, notably solar eclipse photography, we love to travel, we love active volcanoes like Kilauea.

C.G.: Again, I will agree with Fraser on this.  There is so much we have experienced here in the outdoors of LA/WR.  For example, in May, we walked a trail above the reservoir and found ourselves surrounded by wild cherries and roses in full bloom. It was such a beautiful place, and the scent was so intoxicating!

PEEC: What do you love about the Pajarito Plateau?

F.G.: The Bandelier Tuff -one of the most famous rock units in the WORLD!

C.G.: I really love the trail system to explore the plateau and the canyons that exhibit such extraordinary cuts through the Bandelier Tuff, Fraser’s favorite rock!  I also love watching and trying to identify the resident and migrating birds throughout the year.

PEEC: What is on your wish list for PEEC for the next ten years?

C.G.: PEEC is doing a terrific job providing classes, hikes, field trips, lectures, and planetarium shows.  The new center and gardens are great!  I know PEEC has become an important part of our community, and I hope that we all can support PEEC’s growth over the next 10 years.  I don’t have a wish list, but I personally wish to become more involved and participate in more of the PEEC activities, like wildflower hikes.

PEEC: Do you have any advice for people interested in volunteering?

F.G.: Just do it. Contact PEEC and learn how you can contribute.

C.G.: There is probably a job for anyone interested in volunteering at PEEC.  The staff is friendly and helpful.  Just tell them your interests and talents, and they will help you find a place to assist in teaching or taking care of the PEEC projects. Get involved!

PEEC: If you could be a local animal, which would you pick and why?

-If you are interested in learning more about our volunteer program, please email Christa Tyson at visitorservices@peecnature.org.