Home › Nature News › Bird of the Week – The Mourning Dove 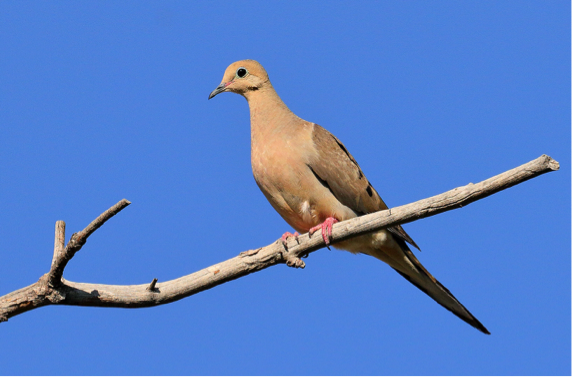 The Mourning Dove (Zenaida macroura) is the most common and widely hunted game bird of the North American continent. They are resident in Los Alamos County all year, and start breeding activities in early spring. They will attempt to raise several broods each year, spring through early fall. One Texas pair was observed attempting to raise six clutches in one season. The mated adults form a strong pair bond which lasts the entire season, and may even extend to multiple seasons.

These attractive birds can be recognized by their pinkish-brown breasts, black spots on their wings, and their long pointed tails. When they take off from a perch, their flapping wings make a whistling sound.

Mourning Doves are extremely plentiful, over 300 million in North America, but they have a short life span, about one year. Many (estimated 20 million) are taken annually by hunters, but other natural causes like weather, predators, and diseases also contribute to their mortality. The oldest banded bird, however, survived over 30 years.

Mourning Doves eat the same diet as other doves, especially like the Eurasian Collared-Dove and the White-winged Dove, whose ranges have been expanding in the New Mexico area. Anecdotal stories suggest the expansion of these other doves has affected the frequency of reported Morning Dove sightings, but large scale studies do not show any significant changes nationwide in the populations of Mourning Doves. In Los Alamos County it is common to have Mourning Doves reported at Bandelier, in the canyons near the nature center, and in White Rock open spaces.

You can attract Mourning Doves to your backyard feeders by putting out seed with millet in it, but do not be surprised if they are outcompeted by Eurasian Collared-Doves and White-winged Doves.

You can also find more detailed articles about the Mourning Doves on the web pages at identify.whatbird.com and allaboutbirds.org. Enjoy more beautiful photos of Mourning Doves at the Alan Murphy or Lynda Goff web sites, or by performing an image search on Google or Flickr.

One comment on “Bird of the Week – The Mourning Dove”