Home › Nature News › Bird of the Week – The Western Tanager 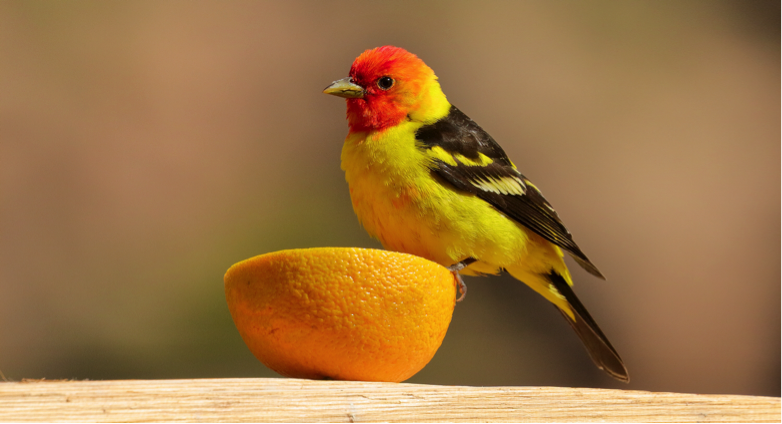 The Western Tanager (Piranga ludoviciana) is our harbinger of spring in Los Alamos, and right now is the time to be looking for them. These brightly colored birds spend their winters in southern Mexico and migrate north to spend their summers almost anywhere west of the front range of the Rockies. Although they will stay in the Los Alamos area all summer long, as the weather gets hotter, they retreat to the cooler canyons or higher elevations to breed. Most years they show up in small numbers in late April and early May, even conspicuously visiting back yards in both White Rock and Los Alamos for a week or so. Last year, in 2015, was an exception, with Western Tanagers showing up in extremely large numbers and staying around for about a month, until early June. What will be the story this year?

Western Tanagers are members of the Cardinal family of birds. Only the adult male Western Tanagers show the bright yellow body and red face feathers, with dark black wings. The adult females are drabber in color, primarily light yellow overall except for brown or olive-green wings, as below.

If you want to attract migrating Western Tanagers, provide them with water and fruit. They mostly eat insects, either picking them off leaves or pretending to be flycatchers and snatching them from the air.

Find more detailed articles about the Western Tanager on these web pages: identify.whatbird.com and allaboutbirds.org

One comment on “Bird of the Week – The Western Tanager”