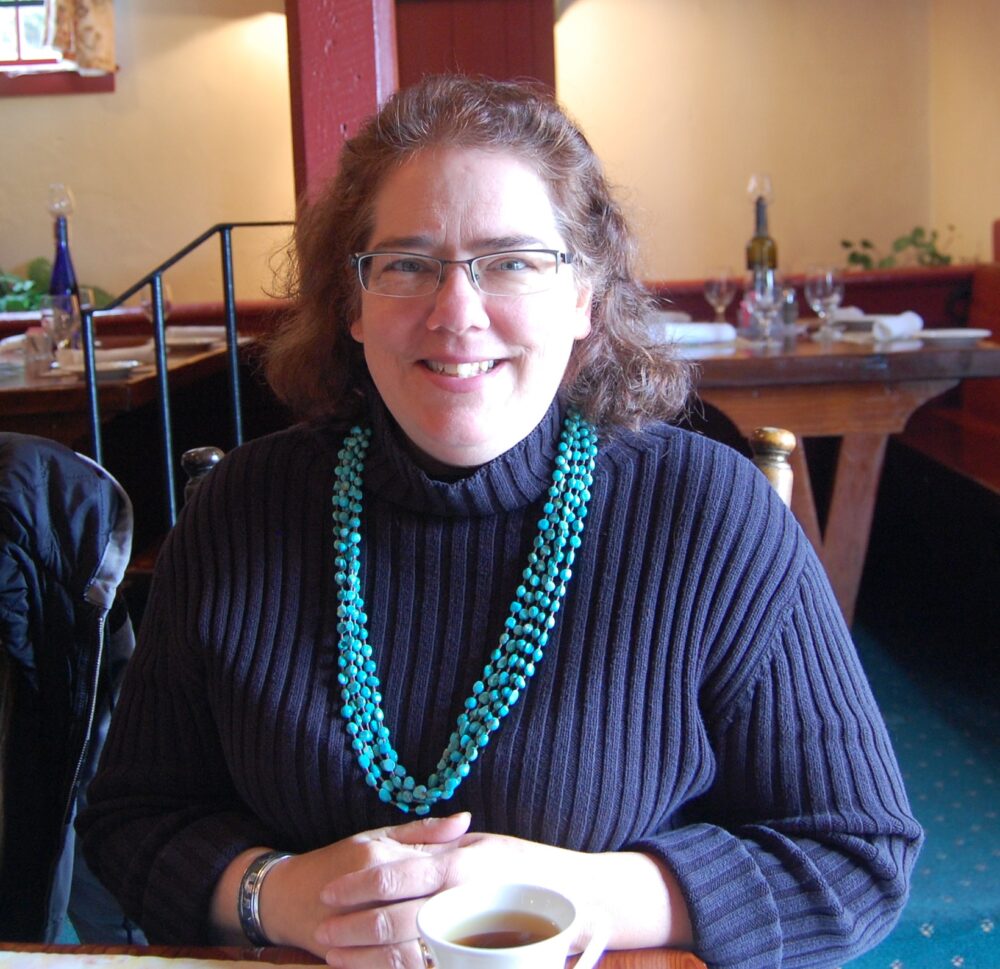 This month we recognize volunteer Felicia Orth, who has served on the PEEC board since 2006. During her time as PEEC’s board president, Felicia facilitated the development of PEEC’s strategic plan and helped the non-profit transition from the building on Orange St. to the new nature center on Canyon Rd. She is also well known for her culinary skills and has catered a number of PEEC events.

Felicia recently retired from her position as the New Mexico Environment Department (NMED) Hearing Officer, where she conducted hearings in air quality, solid waste, hazardous waste, liquid waste, ground water, surface water, and construction programs. Previously, she worked in the Los Alamos County attorney’s office, the NMED Office of General Counsel, and as an associate in a large law firm in the Midwest specializing in toxic tort litigation. Mrs. Orth has an undergraduate degree in philosophy from Washington University in St. Louis and a law degree from the University of Wisconsin-Madison. She and her husband and two sons have especially enjoyed the local canyons since moving here in 1996.

PEEC: How did you get involved with PEEC?
F.O.: Robert Gibson and I were on the Utilities Board together in 2006 when he told me that he had to leave the boards he was sitting on as a result of being re-elected to the County Council. He thought I would be a good match for filling his place on the PEEC board. I only had a limited awareness of PEEC at the time and tried to avoid any further commitments by promising a donation instead. But as you know, it didn’t end there. After he insisted I attend the next board meeting with him, I agreed. At the meeting, I was so impressed by the extraordinary people on the board (Becky Shankland and Chick Keller, among others), by their energy, and by the nobility of the mission, that I stayed and became increasingly involved.

PEEC: In your opinion, what’s the most important work PEEC does?
F.O.: Making it more comfortable and fun for people to get outside. Hiking alone, for example, can be intimidating or lonely. Going on a PEEC hike means the leader knows where he or she is going, and is well-equipped to help others get there. Naturalist experts help people identify birds and other animals, plants and flowers, stars, and other natural things of interest. This guidance is important to people of all ages from all backgrounds.

PEEC: How does PEEC improve your life?
F.O.: When I first joined PEEC, I knew little of the birds, plants, geology, or other natural features of the Los Alamos area. I’ve learned so much since then and feel more knowledgeable and connected as a result. I’ve met many remarkable people through PEEC, with whom I hope to remain friends forever. I’ve also been able to engage my family in PEEC activities.

PEEC: What is your best or funny memory working at PEEC?
F.O.: As we were wrapping up the PEEC capital campaign to pay for exhibits at the new nature center, we offered a wide variety of special outings for donors. Several of the trips were to the Valles Caldera, and I traveled there to provide support and snacks—appetizers for elk-watching and geology tours, cookies and hot cocoa for star-gazing, etc. I arrived early for one of the evening events and found myself stuck at the locked entry gate. Standing there for a while, I heard what I thought was a Native American flute being played in the woods across the road. I listened, enchanted, truly believing that a person was in the woods noodling around on a flute, inspired by the sunset, until someone arrived with the code. “Do you hear that lovely music?” I asked. “Do you mean the bugling elk?” “Yes, that’s totally what I meant. Sure, I knew it was elk.”

PEEC: If you had magic superpowers, what would you do?
F.O.: Of the classical superpowers, I’d love to have a rapid healing ability that could be used personally and directed toward others, including regeneration. Of course, there are many abilities I’d love to have even before we got to the magical realm—a facility with other languages, skiing better, or the ability to sing without causing others to cringe.

If you are interested in learning more about PEEC and the Los Alamos Nature Center at 2600 Canyon Road visit peecnture.org. To learn more about volunteering, ask to speak with Christa Tyson, Volunteer Coordinator, or send her an email.