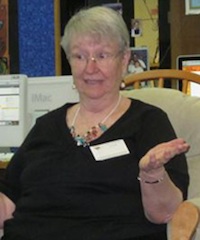 Teralene (Terry) Foxx is well-known around town as a fire specialist, author, storyteller, teacher, Living Treasure and volunteer. She has volunteered at PEEC for many years and in different capacities, most recently serving as the Board President for the past 19 months. In that role, Terry took PEEC from a mostly-volunteer organization, to hiring several part-time, paid staff members. She also oversaw the initiative to establish the Los Alamos County Nature Center, a public-private partnership between Los Alamos County and PEEC. For personal reasons, Terry has had to reluctantly step down as President. She handed over the reigns to Vice President Felicia Orth, who will serve as Interim President until the next PEEC Board election in October, while Bob Walker has been voted as Vice President. PEEC sat down with Terry to learn more about her full and fascinating career and how she landed at PEEC.

PEEC: You have such a rich background – where do we start?
T.F.: Well, I was raised in southern Idaho on a wheat ranch. On the prairie in the spring, there were so many camas lilies in bloom. They were a purplish-blue color, and they looked to me like little pools of water. My mom would take us around, talk to us about the flowers, and pick up snakes. From an early age, I was immersed in the natural world with people who loved the environment.

PEEC: How were you able to parlay that love of nature into a career?
T.F.: In college, I decided I wanted to be a biologist. In those days, women typically became teachers, nurses or secretaries. My father always thought that education was my insurance policy. I was going to be the first person in my family to get an education, and he had a vision that I was going to be a teacher. When I told him I wanted to be a research biologist, he told me that was fine, but if he was going to pay for it, I was going to be a teacher. That ended up being a good thing, because I love teaching, but I also love being a research biologist. At college, the biology teacher was one of the most dynamic and charismatic people I had ever met, and I knew that’s what I wanted to do. We took a 7-week field trip from Idaho into Mexico to study the flora and fauna of the Southwestern U.S. and Mexico. One of my most treasured memories is of the lecture we had on the beach at Guaymas. It was just beautiful!

PEEC: How did you end up in Los Alamos?
T.F.: I came to Los Alamos in 1969 after completing graduate school. UNM-LA was just getting established, and I had the opportunity to teach there, which I loved. I was also able to become involved in some research, looking at the archaeology of the flood pool of Cochiti Lake in the early 1970’s. That was great, because it became a family affair. My children were only 4 and 6 at the time, but for the research, we had to hike 6 miles back to Alamo canyon every other weekend. For the whole summer the kids joined me on those hikes, and we really became immersed in the ecology of the Pajarito Plateau. Besides teaching at UNM-LA, I worked at the Lab. I started there in 1977 and worked part-time until the late 1980’s. Then I became a regular full time employee until 1999.

PEEC: What kind of work did you do at the Lab?
T.F.: In the 1970’s, environmental laws came into play. That was a cultural change for the U.S. and especially for organizations like LANL. We had to start looking at the impact of the Lab’s operations on the environment. Throughout my career at LANL, we spent a lot of time working on conservation biology, which involved looking at how the organization was preserving the environment, while still maintaining its normal activity. It was a cultural change for everyone.

PEEC: Your specialty, though, is in fire ecology. Tell us more about that.
T.F.: I was involved in some fire studies with Loren Potter but before we finished, the La Mesa fire burned all the plots. So I’ve been following those plots for over 40 years now. After the Cerro Grande fire, the Lab asked me to come back to write something to give people hope. The publication was called “Out of the Ashes – A Story of Natural Recovery”, and the idea was to help people understand the importance of fire in the ecosystem and the recovery of the landscape.

PEEC: What would you say to someone who looks at the mountain and feels sad about the trees gone?
T.F.: I feel sad too, but because I’ve been out there and within days I’ve seen oak sprouting, I know that nature is healing. It’s not healing like we want it to heal, but it is amazing nonetheless. I encourage everyone to get out there and really look. I think the best thing that happened to Los Alamos after the fire was the volunteer task force under Craig Martin and John Hogan. It got people to help out the environment and see first hand what was going on. There will be trees out there someday, but not in our lifetime.

PEEC: We know you have authored several books. Tell us about your work as an author.
T.F.: From an early age, my children had to go out into the field with me. They learned a lot about the environment. After the Cerro Grande fire, my oldest daughter wrote a song “Los Alamos will be Raised from the Ashes”. She had also written a poem. I looked at it and thought how it really explained a lot about fire ecology in a child’s voice. She told me I could illustrate it, so we worked together on the book. When it was finished, we took it around to all the grade schools to get feedback from the students. Eventually, the book was published by the Los Alamos Historical Society. That’s how I got started. In total I’ve written 5 books and many scientific publications on a variety of topics.

PEEC: You are also a storyteller. How is that different than writing books?
T.F.: The storytelling side is a little different. I used to tell stories when I taught, but I never really considered myself a storyteller. Then I found that I could do an apprenticeship with a real storyteller. We would meet different places in the U.S. Iceland and Ireland to study stories. I still didn’t think of myself as a storyteller but after the Cerro Grande fire, I found that telling stories was part of the healing process. Everyone had a story, and they needed to tell it. We can talk all we want about science but until we tell it as our story, we don’t truly understand it. Science is the head, and story is the heart.

PEEC: How did you become involved with PEEC?
T.F.: As a field biologist, I was outside all the time. Dorothy Hoard and I taught wildflower classes for 40 years. I always enjoy taking a group of people out in the environment. I would tell them about the bark on a pine tree, how it smells etc. and hear someone say, “I have never noticed that before”. In my classes with Dorothy, our goal was not for people to learn the scientific names of the various species they were seeing, but just to get them to notice what’s around them. Observation is key. PEEC’s mission to educate is one of the things that attracted me. When I first started with PEEC, I was just teaching classes at PEEC, but then I volunteered to be on the Earth Day committee. That was one of those things that the founders did the first year they formed PEEC, so it’s been going on for 14 years. I think I’ve been involved with Earth Day now for about 6 or 7 years. It’s nice now having staff to help! When I became President, Katie [Watson] was doing programs, and that was all we had. Since then, the county has voted on the nature center, passionate board members and volunteers have made it run, and hiring staff has helped PEEC to become more business-like. Hopefully that’s the one thing I may have contributed during my presidency.

PEEC: How do you feel about the honor of being named a Living Treasure?
T.F.: It’s a wonderful award and my biggest hope about my life is that in some way, I’ve inspired people to love the environment and to have faith in themselves. When I started out early on, I applied to a research center on the coast of Washington. I was told that they couldn’t hire me because they would need to provide facilities for women. I hope I’ve been able to give other young women incentives to break barriers. I also hope that every day someone has learned to observe and appreciate more what’s around them, because that’s what I’ve tried to do.