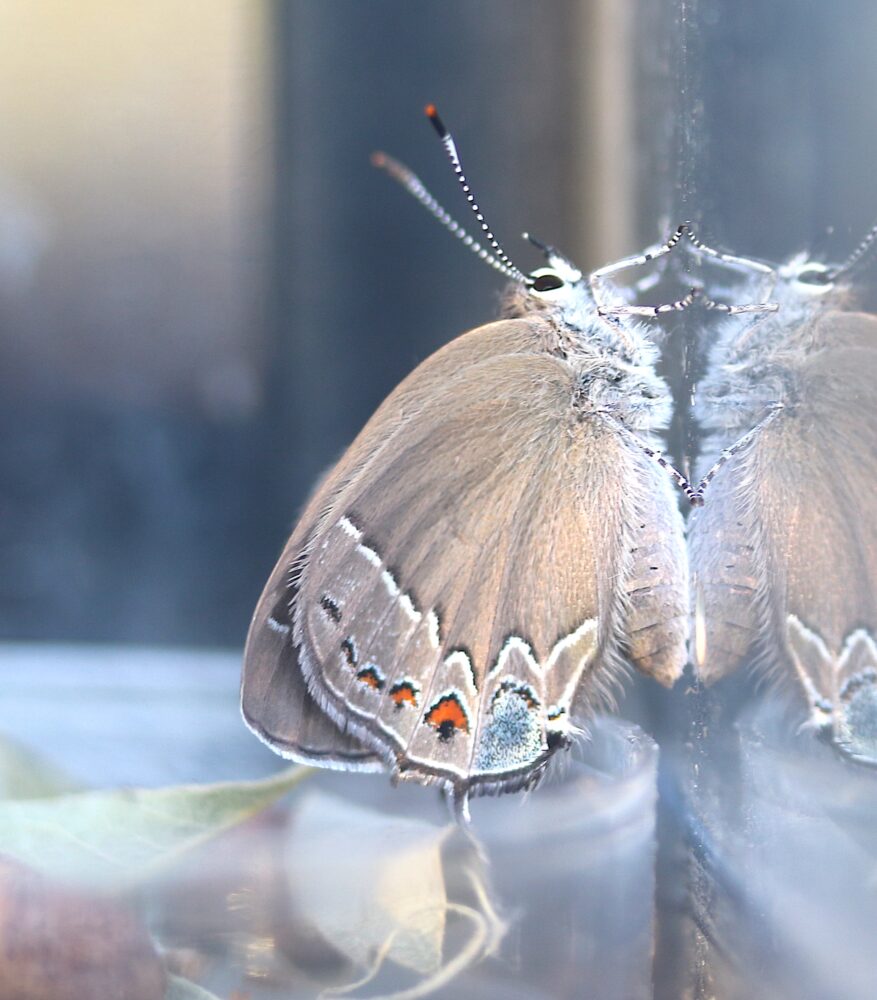 Yes, it’s dry, the heat is upon us, surely, and yes, there’s a little smoke in the air. Hey, it’s June, so get over it. The mid-90s in Santa Fe is not pretty, but other places are even hotter, so I’m not complaining. In southwest New Mexico, Elaine Halbedel gets out frequently and reports poor conditions and few butterflies everywhere except in the region’s higher mountains. One thing all our several southern observers agree on . . . Marine Blues are having a good year! It makes sense because their widespread mesquite hosts (their caterpillars will eat virtually any legume) are deep-rooted and less daunted by drought. In the face of dry, hot and smoky, several fun and fascinating stories are offered below, including a remarkable new hairstreak life history, and even a brief video. But first, as they say, some notes from our sponsors:

Second, The Xerces Society’s Spring 2021 issue of Wings: Essays On Invertebrate Conservation highlighted two recent scientific articles of great interest. From March 2021: Forister et al., 2021. Fewer butterflies seen by community scientists across the warming and drying landscapes of the American West. Science 05 Mar 2021; Vol. 371, issue 6533: pp. 1042-1045. And from January 2021: Kawahara et al., 2021. Opinion: Eight simple actions that individuals can take to save insects from global declines. Proceedings of the National Academy of Sciences. January 12, 2021 118 (2) e2002547117. I was able to view the full article here. The latest News of The Lepidopterists Society also printed the story.

The Eight Action Items are as follows:

Third: Report Your Western Monarch Sightings! To the Journey North community in Arizona, California, Colorado, Idaho, Montana, Nevada, New Mexico, Oregon, Utah, Washington, and Wyoming: Observations of western monarchs this time of year are often sparse as they fly to their summer breeding grounds through large, uninhabited areas. But the low number of reports is still concerning, especially given the continued decline in the western monarch population. Reporting your observations of monarch activity — including adult monarchs, eggs, larvae, and milkweed — is more important than ever. Are western monarchs finding suitable habitats and resources? Are they being observed in their historical range? Are they arriving earlier or later than in the past? Your reports provide critical data. With greater knowledge, we can strengthen advocacy and protection measures for western monarchs.

And now here are some early summer reports, with illustrations, from several New Mexico butterfly adventurers …

From Jim VonLoh on June 1:

Hi Steve; I spent quite a bit of time along the Soledad Canyon and Bar Canyon trails yesterday [Organ Mountains, Dona Ana County] and about 99.5% of available nectaring is being provided by honey mesquite which is widely distributed. There were common butterfly species using this food source and adjacent shrubs, including marine blues — probably well into the low hundreds of them. I also observed fewer than 10 individuals (aggregate) of Sonoran Metalmark, Gray Hairstreak, White Checkered-skipper, and one large yellow swallowtail at the canyon head. There’s no moisture available at the headwall seep/spring at this time.

Recently retired and interested in butterflies (especially hairstreaks), I’ve had the good fortune to become acquainted with a couple of focused individuals who occasionally “share the road” with me out looking for butterflies in the vast Texas/New Mexico/Arizona region. I refer to The Extraordinary Bill Dempwolf (Austin, TX) and the Superb Jim Brock (Tucson, AZ). Now, everyone with a true passion or obsession for a subject wants to know something more, something that’s not already known (nor available on The Web). The more we learn about ANY subject, the more we find we don’t know.  Searching for a single answer, don’t we always come up with 100 more questions? Along those lines, it would seem that some (or many) of the butterflies of the Trans-Pecos region really have little recorded about them. After all, we have only recently “discovered” some of them exist!

In some butterfly discussions (I bring up hairstreaks), up pop questions about Poling’s Hairstreak (Satyrium polingi). Fairly mysterious, a nearly unknown life history, and certainly unpredictable. Discussion excited us (well me for one). Have YOU seen one? Looking at website maps like on BAMONA or iNaturalist, we can see recorded observations; pretty much the adult on the wing. Known to exist in west Texas and southern New Mexico (also Mexico). What seems factual is that they are associated with oak trees, they best like milkweed for nectar if they can get it, and they have a flight in May/June and it seems some years in August/September. Their closest cousins in taxonomy are other oak hairstreaks, Satyrium ilavia, and the Texas oak hairstreak, Satyrium favonius autolycus.  Other than this, not much?

So “Discovery Mission 1” this past year was to raise Polings’ from egg to adult … if we could, and photo document them as they grew. While it has been a win, sometimes there are lows with the highs (did I mention travel?)! Results from this step surprised us, raised MANY questions, and may be of interest to you! Here are a few pictures of the egg, a couple of caterpillar stages or instars, the pupa, and an eclosing adult. Not many people have seen what you are about to! What say you?  My, what fun!

Last year at this time there was a large flight of Poling’s in Texas. Bill D. and I separately caught and caged females with oak branches from their capture spot. Quite readily they laid eggs, but of course, you have to overwinter the eggs. These were gray oak trees or shrubs (Quercus grisea). The literature says they use Gray or Emory oak (Q. emoryi), but now I would be surprised if they do use Emory. I would not be surprised that they use scrub live oak (Q. turbinella). I read Steve’s study and I read up on oaks … gray and turbinella seem to readily hybridize for instance. Also, a reared female Poling’s readily laid eggs on the turbinella scrub oak, a species that hosts other hairstreaks as well.

Bill, all I can say is WOW! And, thanks for retiring! Poling’s is kind of a specialty species for southern New Mexico, as well as west Texas, and this detailed life history is wonderful to see. I know you and your co-authors intend to publish a meatier version of this story in a more august scientific periodical, where more details can be revealed. For example, one nuance of Lycaenid life histories is the potential role of ants in support of larvae, a mutualistic relationship known as myrmecophily. Has your team has identified any ant species that operate in that role for Poling’s Hairstreak? I can’t wait to read and learn more when the full version comes out.

For now, this humble NM Butterfly blogger is honored and grateful that you shared this story and these remarkable photos. Documenting host plants and documenting life histories is sacred, foundation-building work. Those who do this work, like Bill, Bill, and especially Jim, enable the rest of us to enjoy these creatures much more fully. This is a great way to celebrate June as “Hairstreak Month;” at least that’s what it says on my calendar.

Hello Steve, the kids and I went down to the San Mateo Mountains yesterday (6/12/21). We got into Forest Service lands at about 10 am and left them about 4 pm. It was very dry and I was surprised at how much of the landscape had burned a few years ago. On the drive up to Bear Trap Campground, we saw very few flowers. There was some verbena flowering along the road that attracted flying insects. The few butterflies there included Viereck’s Skipper and an unidentified yellow that made a brief visit. Further up the road, there was a very large patch of flowering raspberry that was literally swarming with insects including Marine Blues and Northern Cloudywings. As we headed down Bear Trap Canyon to the campground, we started to see Weidemeyer’s Admirals and swallowtails, and then we lucked out by seeing our first ‘Socorro’ Chryxus Arctic. As we traveled down the road, we saw around 8-9 Arctics.

Once we got to the campground, we began to explore around the meadow and the little spring area, which had no water. We found 6-7 more Arctics (some doing their mating dance). We also saw a few whites on the edge of the meadow that we never got close enough to ID, Weidemeyer’s Admirals, Marine Blues, Western Tiger Swallowtails, two types of fritillaries (one large and very dark red [Argynnis nausicaa], one smaller that was an extremely pale yellow-orange [Variegated Fritillary?], and a few other species. Flowering plants in the area included Ribes (which were mostly done), wild iris (also, mostly done flowering), some buttercups, and some daisies. After visiting the Mt. Withington lookout, we saw about 3 Arctics on the road down, not too far from the lookout. Western Tiger Swallowtails were seen everywhere we went and, at the lookout, we saw a fast-moving black-colored swallowtail.

Brooke had a blast as, despite the dry conditions, there were many butterflies to net. And swallowtails kept landing on her head!

From Matt Brown on June 14:

I ended up in the Cloudcroft-Rio Penasco area for three mid-June days, where at least there was some water, nectar, and a few butterflies. It looks like there’s gonna be a massive thistle bloom from about 7000′-9000′ in a week or so up there. Same for the super-abundant, tall yellow thing I haven’t looked up yet (the few first-bloomers of these were wildly attracting multiple species) [sounds like cutleaf coneflower (Rudbeckia laciniata to me]. Iris up high are 90% done, but the late-bloomers were in high demand. I found Sandia & Juniper Hairstreaks at Weed (right before a 55-degree, pea-hail thunderstorm); Milbert’s T’shell at Rio Penasco; Tawny-edged Skippers and N. Cloudywings everywhere; Texas Roadside-skipper at Mayhill; several mostly worn Erynnis it’ll be a nightmare to sort. Marine Blues were underfoot every-freakin’-where all the way up to 9500′!

A day later, Matt resumed his mental download . . . The “crescent” I couldn’t figure out turned out to be Chlosyne nycteis, thanks to help from Michael Newton. I was in the wrong genus and several pages off in Glassberg’s book (which doesn’t show nycteis in SC NM anyway, in my weak defense). I’m sure the variety of expression and hue of various dorsal wing-markings are due to individual and sexual variation, since all the ventral shots look very similar.

I’m pretty sure both the Amblyscirtes (two different bugs, one noticeably bigger which I thought was a Sheep Skipper the whole time) are texanae, but the little brown guy’s identity still eludes me. It’s pretty fresh-looking, so I don’t think it’s worn off any markings. The weak fringe-checking and diffuse, ventral hindwing leading sub-marginal spots lead me away from Euphyes vestris, which I originally thought. All-in-all I had a great time. New Mexico has some pretty special places! See all of Matt’s Sacramento Mountains photos here.

Do any readers want to weigh in on what this skipper might be? Please use the regular comment function for this blog post. I look forward to seeing what creative options you might suggest!! We need all the help we can get!

Last but not least, here is a brief story with video from Bernalillo County Master Naturalist Linda Butler:

Hi Steve, yesterday (June 13) in the heat of the day, I found a Mourning Cloak motionless on the concrete in the shady part of my patio. I put it on a plate of sugar water with some pollen grains for flavor. It drank a lot, then recovered and flew off. Is this common for butterflies? Like heatstroke?

Linda, I have no idea about heatstroke, but I think you did a good thing. Here is a video of the apparently revived Mourning Cloak …

That’s all until July. Stay cool!