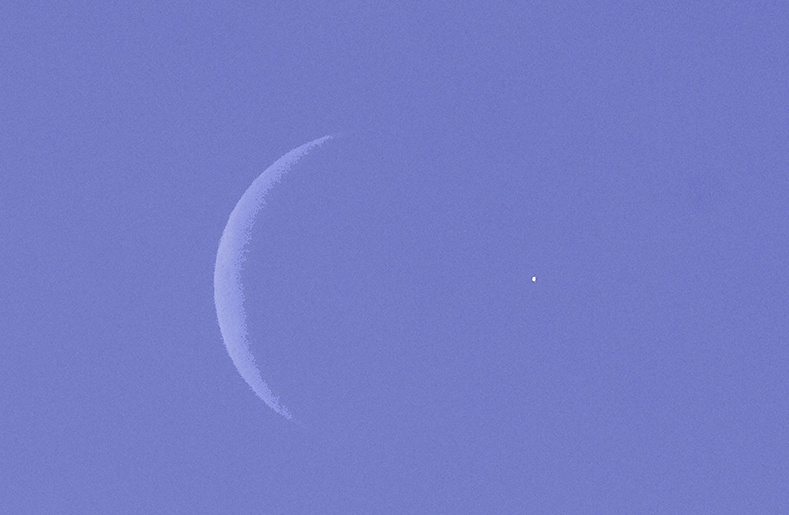 Last Monday, the western United States had the chance to see the Moon pass between Venus and Earth. Even though it occurred during the day, this special event was still visible to the naked eye since Venus is so bright. Luckily, we were ready to witness and document this rather rare phenomenon. The Los Alamos Nature Center patio was occupied by excited sky watchers of all ages. We set up a telescope and used binoculars to get a better view of Venus’ reappearance.

Before dawn on Monday, the crescent Moon and Venus were close together. As the morning progressed, it quickly became clear that the Moon would pass in front of Venus. After sunrise, when the moon was very close to Venus, observers could easily see this neighboring planet with the naked eye!

The thin crescent of the Moon officially occulted, blocked, Venus at about 9:30 a.m. Since Los Alamos was on the center line of this occultation, Venus was out of sight for over an hour and a half. Then, as if by magic, Venus reappeared at 11:19 a.m. Again, since we knew exactly where to look, we could see it in broad daylight.

It is rather rare for the Moon to occult our line of sight of the planets. Even though the Moon is much smaller than our neighboring planets, it appears significantly larger in the sky. This is due to it’s relative distance to Earth. Objects closer to Earth will appear larger than objects farther away.

Occultations also help astronomers determine relative distance to Earth, because the object that disappears must be farther away from us than the object that remains in our sight. Thus, Monday’s occultation confirms that the Moon is closer to Earth than Venus.

Here is your chance to be an astronomer. The photo above was taken just as Venus reappeared. Can you explain why Venus emerged so far away from the Moon’s crescent?

I noticed this occultation by watching the sky. I had not seen a prediction or notification. So keep looking up. You never know what you’ll see.