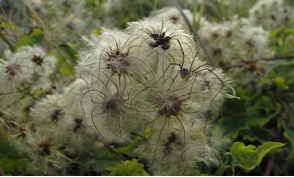 While waiting for the flowers to return, train your eye to find insects next year.

Late summer can be a good time to look for insects. Insects grow larger during the summer and so may be seen more easily. However they have different kinds of camouflage to hide themselves. A praying mantis may grow to be up to six inches long, but how many people have seen such a large one? A praying mantis may be so well camouflaged that it can capture a hummingbird that is coming to a flower for nectar. A praying mantis selects plants that match its color rather than changing its color to match a plant.

Certain species of spiders have body shapes, legs and colors that match the flowers on which they lurk, waiting for an in insect to arrive. The spotted orb weaver spider can be found on the on flowers that are going to seed when summer is ending. Its abdomen has a color pattern that is similar to the seed cluster it is standing upon. The spines on its legs and abdomen also match the size of the spines on the seed cluster. It is nearly invisible when seen from above. However, it is more clearly visible when seen from the side when its body extends away from a seed cluster. Fortunately the cobweb of an orb weaver helps in locating it. Although the spider may not be immediately visible, the silken threads of its web show that it is near.

The ambush bug presents an extreme in camouflage. The color can vary from insect to insect. The body shape is irregular in shape with bumps and angular points. As its name suggests, it waits motionlessly in a flower for an unsuspecting insect to arrive. The front two legs are claw-like and used to grasp its prey, much as the praying mantis does.