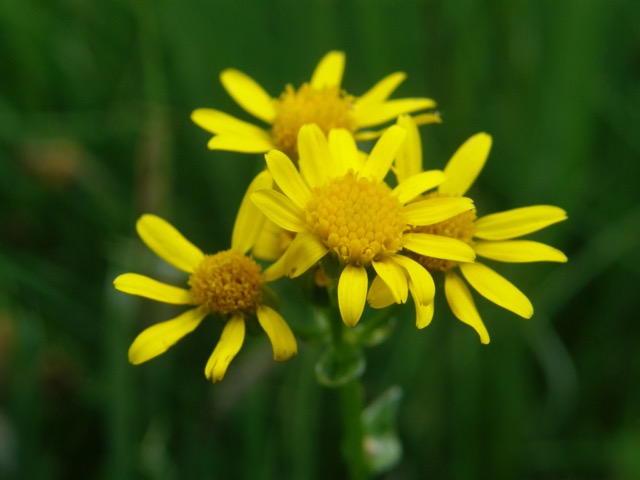 This week one of those little yellow flowers is blooming in the canyons and meadows near townsite. It is New Mexico goldenweed or groundsel (Packera neomexicana).
Though Packera neomexicana is sometimes difficult to identify, right now it is easy because there are often hundreds in groups of up to 40 plants. You will find these clumps of yellow flowers near perimeter trail, in Water Canyon, along Quemazon Trail, and elsewhere.
The flowers differ from the more common Perkysue in that they come to a point instead of being square with three teeth. The pictures show it to have one to many stems arising from a clump of hairy basal leaves that are funny shaped—starting out thin and getting wider—but rather variable. This variety in leaf shape gives this plant its varietal name mutabilis which means “changeable”.
A rather handsome plant that is doing especially well this spring due to late rains, Packera neomexicana is replacing the smooth-leafed Wooton’s butterweed (Senecio wootonii) that has been blooming for about a month. It will in turn be followed by the less common, notch-leaf butterweed (Packera fendleri) that is just now starting to bloom.

2 comments on “Wildflower of the Week by Chick Keller”