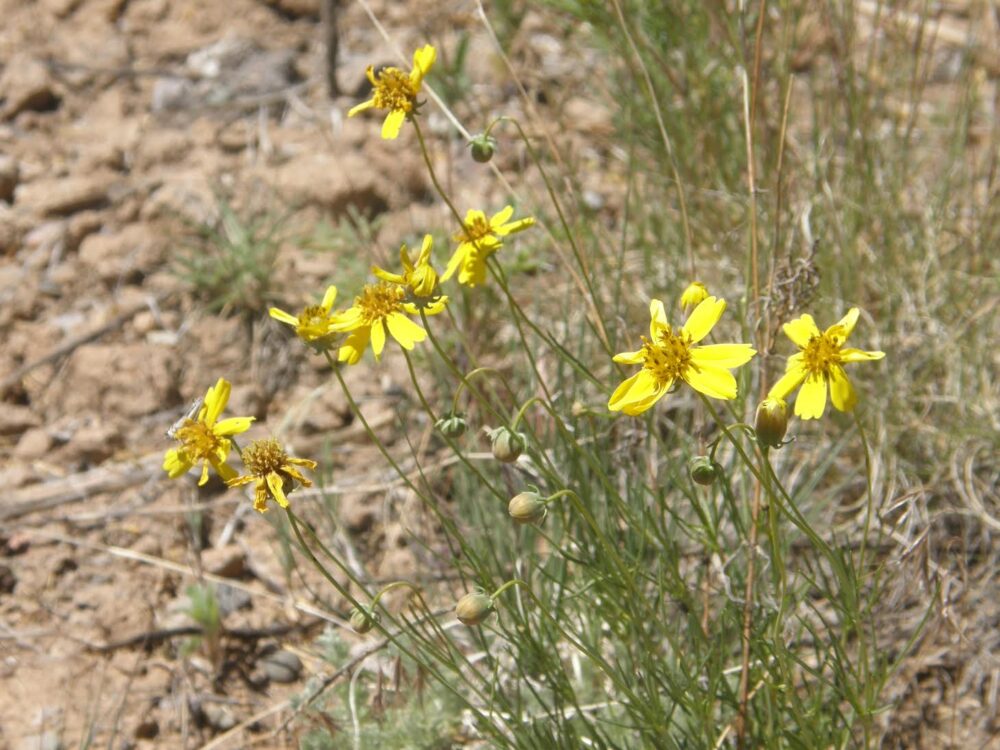 This week’s flower is growing in many places both in White Rock and the Townsite often in large numbers—very impressive and beautiful.  An annual yellow composite, it’s got several common names:  Hopi tea, Navajo Tea, greenthread, etc.  I prefer greenthread.  Scientifically it’s Thelesperma filifolia.  It’s currently very abundant along the paved Rim Trail across from the Holiday Inn and Co-op.  But, because it prefers disturbed soil, it’s a pretty common roadside plant.  True to its name, it has leaves that are thin and ‘thread-like’, which is what ‘filifolia’ means in Latin.  One interesting character is the nature of the little green structure that holds the flowers.  In composites this is called its ‘involucre’.  It’s usually made up of small leaves stuck together, but in greenthread it’s a solid hemispherical ‘bowl’ with a few little leaf-like things sticking out of it.  No other composite has an ‘involucre’ like this excepting greenthread’s petal-less cousin, cota (used for a dye in weaving)—Thelesperma megapotamicum– also called Rio Grande greenthread. Note here the Greek for Rio Grande—‘mega’, which means very large, i.e. grand, and ‘potamic’ which means ‘river,’ as in hippopotamus and hippodrome.  The petals are squared off with a few teeth, a further way to separate it from other little yellow composites.  Right now it’s putting on quite a show.  Enjoy.