The 2020 Los Alamos County science fair was held on February 1st. Each year, PEEC provides small cash awards to students at the fair. In judging for these prizes, we look for projects that take inspiration from nature, particularly those that make use of local materials from nature, are conducted outdoors, or aim to improve or understand the environment. There are usually several projects with these characteristics, and we choose a few of the best for prizes. This year there were an unusually large number of Junior projects in PEEC’s interest areas, so we gave more Junior level prizes than usual, and still wished we could reward more students for their interest in nature.

We enjoy talking to students, who are often enthusiastic and have new perspectives on the natural world as a result of their research. Students, in turn, appreciate talking with adults who take an interest in their work. Judging is a positive experience for all involved, and we encourage local citizens to volunteer as science fair judges. 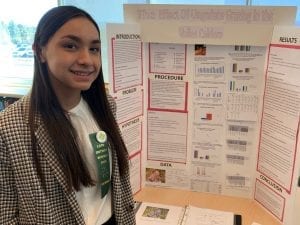 The Effect of Ungulate Grazing in the Valles Caldera by Anna Abeyta, Los Alamos High School

This project surveyed crayfish populations as an indicator of water quality in 3 locations in the Valles Caldera: San Antonio Creek, Jaramillo Creek, and the East Fork of the Jemez River. The 3 sites are in areas with different degrees of grazing pressure from elk and/or cattle. No significant differences were found among the 3 sites, neither in crayfish populations nor in water test results. However, the project made some interesting observations about grazing intensity around the sites. All crayfish found were a non-native species, Oronectes virilis. The student is interested in doing further studies to find and document native crayfish species. 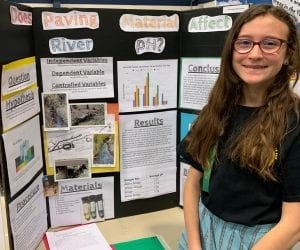 This student was interested in cement and its effects on water pH and possible effects on fish and other aquatic life. She tested the pH of the Rio Frijoles at 4 sites in Bandelier National Monument, upstream and downstream of a cement bridge. Her results didn’t show any significant differences in the pH at the 4 sites. She followed up on this result by testing the pH of cement and tar samples soaked in a small volume of water. In these experiments, the cement did cause a measurable decrease in water pH. 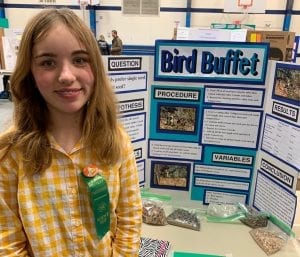 This project asked a question that many birders have wondered: what kind of seed do birds prefer to eat? The student studied the same topic last year, but took those observations and extended the study in greater detail this year. She filled 6 birdfeeders with 6 kinds of bird seed. Three were mixtures of seed, and 3 were single types of seed. She measured the amount consumed for 1 month. The most popular bird seed was safflower seed, and the least-popular was sunflower seed. She also recorded the weather during the experiment to see if weather affected seed preference. The most common birds at her feeders were sparrows, dark-eyed juncos, and house finches. 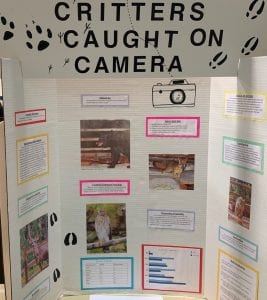 This student took critter-camera photos in two locations, one location near her house in a residential area, and the other at a location near a canyon rim farther away from houses. To compare the frequency of wildlife sightings at the two locations, she collected photos for 3 months. She identified several kinds of animals, such as bears, raccoons, deer, squirrels, and birds. Most animals were more abundant at the canyon rim location, but notably deer were more abundant in the residential area. 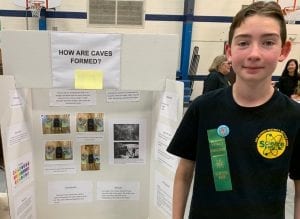 How Are Caves Formed? by Evan Strohmeyer, Pinon Elementary

This student was inspired by a trip to Carlsbad Caverns, where he learned that caves are formed by acid acting on limestone rock. He hypothesized that the water that creates caves is acidic, so he performed some experiments using chalk to simulate carbonate rock. An acidic solution of vinegar dissolved the chalk faster than water did. While the hypothesis and experiment were simple, the student demonstrated an excellent understanding of various types of caves and the kinds of naturally-occurring acids that form caves. 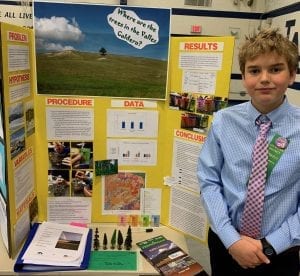 Where are the Trees in the Valles Caldera by William Borovina, Los Alamos Middle School

This project began with the observation that the Valle Grande, and other valleys in the Caldera are grasslands. Why don’t trees grow there? The student’s hypothesis was that the accumulation of volcanic ash makes the soil unable to support trees. He performed soil tests, which showed that the soil in the Valle was not significantly different from other soil sources. Although his original hypothesis was incorrect, further research by the student revealed other reasons involving the frequent flooding of the valleys and the colder temperature in the valleys. 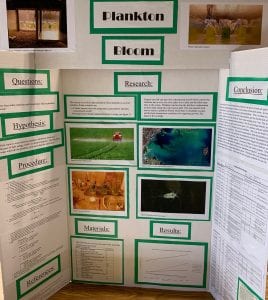 This project began with observations about the negative environmental effects of plankton blooms. The hypothesis was that plankton will cause larger blooms in water that is warmer and less salty. Nanochloropsis phytoplankton was grown in beakers, with the variables being fertilizer, temperature, and salinity. The results showed that warmer temperature did allow for more growth of the plankton, as hypothesized. The phytoplankton grew better in saltwater, and less well at lower salinities, which did not support the original hypothesis. 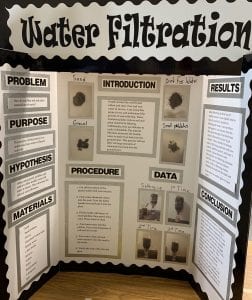 This project looked for a way to make a natural filter that would remove soil and plant material from water. The purpose was to better understand how water is filtered in nature, and to try to find a way for people to replicate the process and produce purer water. The student made a filtration device involving a cotton plug and layers of gravel and sand. Muddy water was poured through the filter. The conclusion was that the filter did clean the water somewhat, and did best when the water was poured through several times. The student concluded that this process is slow, and wouldn’t be easy to use for cleaning water for human use.