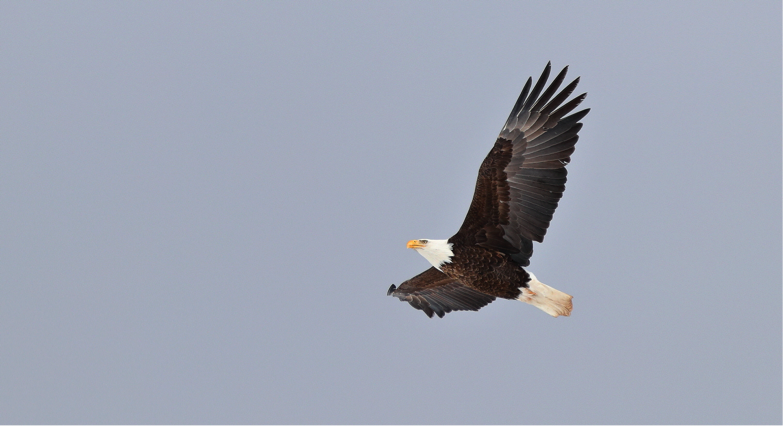 Yes, we do see Bald Eagles (Haliaeetus leucocephalus) in Los Alamos County! They are mostly seen in the winter, especially if you hike down to the Rio Grande, or set up a December or January bird-watching stakeout at the White Rock Overlook platform. Bald Eagles are the July selection for Bandelier National Monument’s Year of the Bird program, designed to highlight the importance of protecting migrating birds, and the 100th anniversary of the Migratory Bird Treaty Act. Visit Bandelier’s website to learn more about this program for the remainder of the year.

The Bald Eagle is a great example of a bird whose protection through conservation efforts (especially the cessation of the use of DDT as a pesticide) has improved the outlook for this once-endangered symbol of our country. There are now estimated to be more than 300,000 breeding Bald Eagles in North America, up from the 452 nesting pairs that were in the 48 lower states in the 1950s.

The Bald Eagle gets its name from the old English word “balde”, meaning “white.” This large raptor gets its white head only after it reaches the age of five; the younger birds are a darker mottled brown overall, such as this scruffy bird photographed just outside Bandelier’s entrance station. 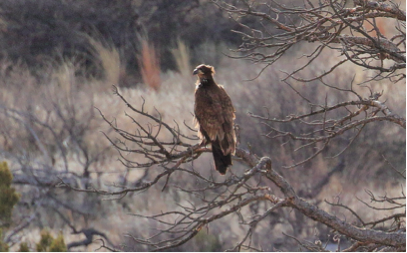 Look for more informative articles about Bald Eagles on the web pages at identify.whatbird.com or allaboutbirds.org or the PEEC Nature Guide. Enjoy more beautiful photos of Bald Eagles at the Robert Royse web site, or by searching images on Google or Flickr.

1 thought on “Bird of the Week — The Bald Eagle”